The power of fungi and fermentation

From co-ops working in pulp and paper, to an internship experimenting with mushroom slurries to make meat alternatives, Leif van Lierop has experienced what he would describe as a “well rounded” education during his time in the Department of Bioproducts and Biosystems Engineering (BBE) at the University of Minnesota.

Van Lierop is a Ph.D. candidate advised by BBE Professor Bo Hu. Last summer, van Lierop participated in a research project funded by the National Science Foundation (NSF). The project’s overarching goal was to take a byproduct of dry milling corn-ethanol production and create a nutritious bioproduct that can be fed to animals. 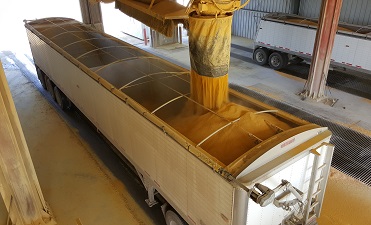 During the process of converting the corn to ethanol, the yeast converts all the sugars, like starches, into alcohol, and after the ethanol is removed you are left with whole stillage–or a mix of water, fiber, protein, and various nutrients. The whole stillage then goes through a series of drying processes until it is ready for use as feed for cow. This bioproduct is not a feasible feed option for monogastric animals, or animals with just one stomach because they are unable to break down the fibers.

During the NSF project, van Lierop and the team researched methods to break down this bioproduct even further, making it a viable and nutritious feed option for other animals, primarily pigs. One way of breaking down the fibers is to use fermentation. The research team looked at using fungi, which has been used in fermentation processes for human foods for hundreds of years–think miso soup, which is made from soybeans fermented with fungi found in koji rice.

This research in BBE led van Lierop to pursue a summer internship in fermentation. A problem with this field is that most of the companies doing research in this area are startups without established internship programs.

Van Lierop decided to think outside the box and began reaching out to companies directly, asking if they had any openings for a grad school intern. He was not having much success initially, but then his luck turned. He found out NSF funding was available for graduate students to use towards internships in research similar to his project with Professor Hu. With this funding opportunity, van Lierop continued researching companies that could potentially offer him an internship opportunity. 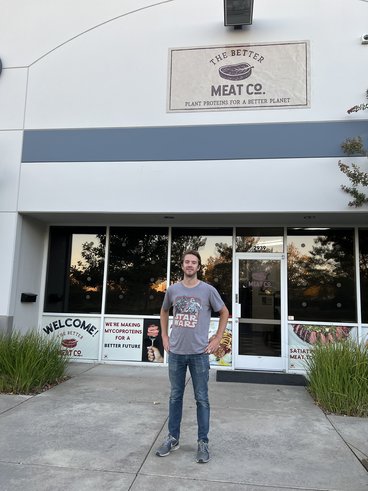 That’s when he came across Better Meat Co., a startup in Sacramento, California. After some emailing back and forth with the CEO, van Lierop mentioned he had potential funding for an internship. From there he connected with the human resources team, met everyone over Zoom, and was told he could join them over the summer to work in research and development.

Van Lierop initially worked on flask fermentations, using different types of nitrogen and sugars to observe the performance and effect on the biomass and protein content of fungi. The end goal of the testing, and of the company, is to offer versatile, fully animal-free meats made from fungi. Better Meat Co. is partnered with Hormel Foods, a Minnesota based-company, and Perdue Farms.

“They send them the fungal protein products and Hormel comes up with different ways of using it,” said van Lierop.

Better Meat Co.’s focus is on taking common ingredients like potatoes, fermenting them using fungi and specific techniques, and finishing with an end product that is all-natural, high in protein, and has a natural texture like animal meat.

“Having these alternative meat products is amazing,” said van Lierop. “I kept on telling Paul [the CEO], you [have] to sell this at the grocery store. People will buy it. I will buy it!”

Van Lierop said Better Meat Co.’s goal is to replace as much animal meat as possible, even if it is using their fungi meat and blending it with animal meat. Reducing animal suffering and achieving more sustainable practices is the overarching goal, which is why the startup partnered with two of the largest meat processing companies in the U.S.

“Make the decision [to switch] as easy as possible,” said van Lierop. “If alternative meats taste just as good or better, and are just as cheap or cheaper”, then it’s a clear choice for consumers when buying their protein in the supermarket.